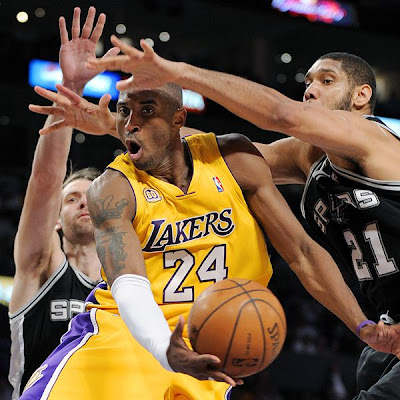 The two best teams of the past decade square off tonight in a meaningless regular season that might actually mean every thing. The knock on the Lakers is that they have just sat at home on the couch flipping channels waiting for their next opponent as if they were just playing NBA 2K on Playstation 3. Nobody is mentioning the injuries that the Lakers have battled while maintaining the best record in the Western Conference. The Spurs on the other hand are supposed to be the team that suddenly got too old and became a little too redundant and predictable. They started off slow and then the media and the NBA fans automatically wrote them off. And yet, here we are today and the Spurs have one of the best records in the west. Like I previously mentioned, the game is supposed to be meaningless; but both teams see this as an opportunity to stake their claim as an NBA powerhouse. So who wins? Let’s break it down.

“Introducing in the purple corner, the undisputed heavyweight champion of the world, the Los Angeles Lakers.”
The Lakers won the NBA title last year and came back this year with Ron Artest replacing Trevor Ariza on the roster. Several people thought that the union of Kobe and Artest (me included) might be the NBA version of 50 Cent vs. The Game (you know, tons of public disputes and disagreements) . Two proud individuals with their own interests above those of the team might be cause for concern considering it might have disrupted the balance of the team. And yet, we have yet to truly see any bad blood or bad chemistry on the team. I was having the talk with my friend Supreme the other day; Kobe winning a championship without Shaq might be the best thing that has ever happened to the Lakers. The Black Mamba now seems more at piece with himself and consequently displays more trust into his teammates. No longer is he going one versus three in his quest to put up 40 points on the board. Instead, he is more than happy to keep throwing the ball down low to Gasol (even in crunch time) and only asserting himself on offense when his team requires it. This year Kobe is basically doing less to do more.


“Introducing in the black corner, possibly the #1 challenger for the crown, former undisputed heavyweight champion of the world, the San Antonio Spurs.”
After losing in the first round last year (4-1) against the Dallas Mavericks, the Spurs decided that it was time to upgrade its roster; so they traded for Richard Jefferson and acquired Antonio McDyess via free agency. The logic behind these moves was that the Spurs wanted one last chance to compete for a title. Mind you, early on in the season, it seemed as though the moves were backfiring. Look at their record by month:
October: 2-1
November: 7-5
December: 10-5
January: 3-2


Add all the wins and losses together though and the Spurs are 22-13, good for fourth in the west. The Spurs just keep plugging along with modest monthly records that will probably result in 50 or more wins this season. That’s just the Spurs way.


As it pertains to the game, it should be a pretty good one. The two best players of the last decade will square off tonight (Kobe and Duncan) and it should make for some entertaining basketball. People seem to think that they have lost a step, but they are still producing at an MVP caliber type level. Look at their respective numbers:
Tim Duncan: 20.0 ppg, 10.4 rpg, 3.1 apg, 55.3FG%.
Kobe Bryant: 29.6 pg, 5.6 rpg, 4.6 apg, 46.6 FG%.


Mr. Bryant and Mr. Duncan would like for you guys to listen to some Jay-Z:

“What the hell have yall done
to even have an opinion on what I been doing,
what the hell have y’all won,
only thing you can identify with is losing,
10 number 1 albums in a row,
who better than me?
[…] men lie women lie, numbers don’t,
ain’t nothing changed for me except the year it is,
I think have to send you a reminder…”


Considering that Gasol will probably miss the game, it will probably come down to Kobe, Odom, Bynum and Artest for the Lakers. Will they be able match up on the road with Parker, Ginobili, Jefferson and Duncan? On paper they should be able to, but one can’t guarantee anything at this point. If Bynum matches Duncan’s output, the Lakers win. But truth is the youngin’ still has a lot to learn before he can take on the Big Fundamental. I do expect a big fourth quarter from Kobe (big surprise) and for Artest to be featured on occasion on offense against Jefferson. The Lakers should be able to control the boards with their size and length which will give them a significant advantage in dictating the tempo. In addition, the purple and gold do a decent job as far as limiting their own turnovers while the Spurs on average turn the ball over more than their opponents. All signs point to the Lakers controlling the flow of the game even if Bynum is unable to hang within the vicinity of Duncan’s output. I see the Lakers getting a big road win in the San Antonio. Pick: Lakers win 102-100.