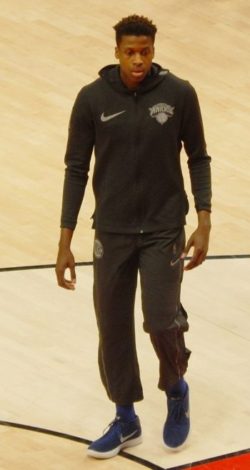 Frank Ntilikina showed he has the potential to be a great point guard in his rookie season. His defense is strong, his jumper is fundamentally sound and he’s athletic to boot. All that said it’s time for him to kick it up a notch in his second Knicks season. Here are the areas where Frank Ntilikina’s game must improve:

Decision Making. Frank made mistakes last season because he played predictably. Learning the NBA game is a process, especially as an international player. Ntilikina is working this summer to fine tune his game.

Ntilikina foreshadowed where he was going to pass the ball, didn’t understand defensive rotations and played over aggressive D, which resulted in foul trouble for the French Prince.

How he can Improve

Frank Ntilikina can move from neophyte to floor general by commanding the Knicks offense. Getting to any spot on the floor, stifling the defense with his handle and knowing when to pass and when to shoot. Ntilikina over passed often in his rookie campaign.

Pass first point guards are rare in the NBA now, but Frank Ntilikina is a pass first PG. That’s a huge strength, but there were definitely opportunities Frank passed up because of his unselfish mentality. There were multiple sequences throughout last season. Clyde Fraizer pointed out, where Ntilikina had open jump shots, or open layups that he passed up.

As Frank works with Knicks Coach David Fizdale, he’ll continue to understand the shoot or pass conundrum. It comes with experience in addition to coaching, and Frank Ntilikina should be a big part of the Knicks rotation. Frank is a great defender and defending quick guards is a priority for the Knicks.

Another priority for the Knicks will be putting the best players on the floor. Coach Fizdale will play the guards that not only impress at camp, but continue to deliver and Frank needs to earn his minutes. Frank has the ability to beat out Emmanuel Mudiay, Trey Burke and crew, but competition can propel Ntilikina to greater heights.

It won’t all happen overnight, but Frank has been putting in the work this summer and he has the tools. Basketball players don’t become stars overnight. The important part of Ntilikina’s development is that he puts in the time, working on his game and taking care of his body.

What do you expect from Frank Ntilikina’s second season? Will he be the Knicks starting point guard? Can the French Prince put up 15 points a game, at least while Kristaps Porzingis is out? Chime in with a comment.

Here’s a video on Frank Ntilikina:

Frank Ntilikina’s ceiling is as low or as high as he wants it to be. Being a 6’5″ guard, he’s got the size to defend just about anyone, but he’s got the agility of a guard a few inches shorter. As he gets more playing time and shows more of what he’s got, the Knicks will get a great feel for his potential.

New York is a place that wants things done yesterday, but waiting for Frank Ntilikina to shine his light on the NBA may be worth waiting a while longer.

1 thought on “Frank Ntilikina: Star in the Making?”